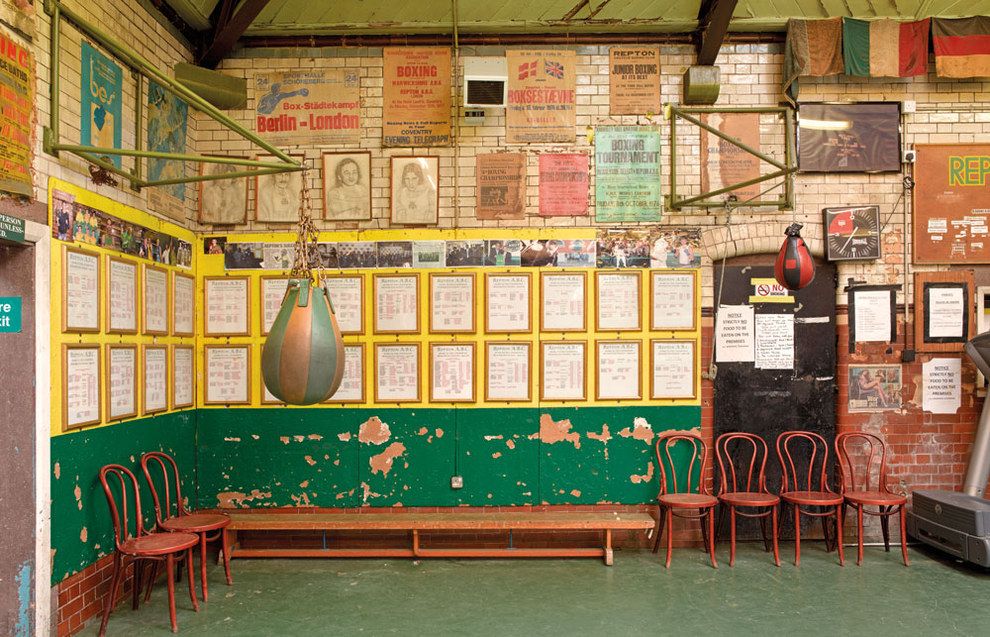 The Oldest Boxing Club in all of Britain…

Set in what is historically one of the poorest parts of London in the area of Bethnal Green, this former Victorian Bathhouse was turned into the Repton Boxing Club in 1884. Because boxing requires little or no equipment (in the past bare-knuckle fighting was common), it gave poor and working-class men a chance to gain both fortune and recognition. The Club’s Motto was “No guts… no glory”, which meant that having a tough reputation was likely to get you somewhere, no matter your background!

Since it’s inception a diverse range of people have trained at this club, including World Champions and Olympic Gold Medalists… and, infamously, the Kray Twins, notorious gangsters who were involved in murder, armed robbery, arson, protection rackets and assaults in the 1950s and 60s.

The Boxing Club is also known for its retro aesthetic appeal. Since 1971 when the Club was moved to a new building it has remained virtually unchanged since. With nothing done to it for half a century, the place has attracted magazine photographers, musicians and film directors. There is a classic ‘film noir’ look when you walk inside, and in the past filmed directors begged the chairman to not change the look of it. Famous movies filmed there include Lock Stock and two Burning Barrels along with music videos by famous artists such as JLS, Plan B and Take That.

Pretty interesting for a Boxing Club, don’t you think?

Speaking of boxing…. Ginger Gold is at it again in Murder at the Boxing Club. The exterior picture above will help you to picture the scene of the crime. 🙂

Despite her misgivings and general distaste for fighting sports, Mrs. Ginger Reed, also known as Lady Gold, agrees to attend a boxing match to support her adopted son’s cousin, a street fighter who’s quickly risen in the ranks.

But when his opponent, the presumed champion-to-be, drops out and then drops dead, Ginger and her husband, Basil, a chief inspector at Scotland Yard, investigate. Was the fighter dead because of sports-betting gone awry? Were London gangs involved? And has an old, but newly present danger returned to threaten the Reed family?

When one of their own falls prey, the gloves come off and the fight becomes personal. Can Ginger and Basil save their family and stop a killer before the towel is thrown in the ring?

Don’t forget to PREORDER and get the book delivered to your kindle automatically!

Have you read the first 19 books yet? Let me know in the comments. I’d love to hear where you’re at in Ginger’s story.